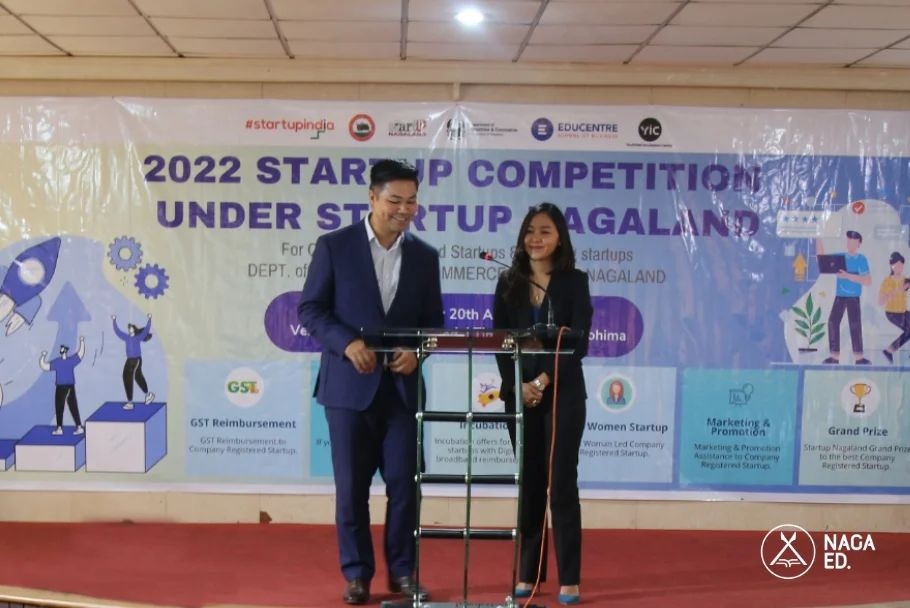 iLandlo team with others after winning grand prize for Startup Nagaland competition in Kohima on August 20. (Morung Photo)

With this feat, ilandlo have qualified for the Rs 3 lakh award, which will be handed over to them by Union Minister of Finance & Corporate Affairs Nirmala Sitharaman during the Corporate Social Responsibility (CSR) and Investment Conclave in Kohima on August 23.

ilandlo co-founder and director Lipokjungla Ozukum said that Ilandlo was formed in 2013 after seeing the limited availability and accessibility of local products outside Nagaland, minimal market expansion opportunities for producers, as well as the lack of common online platform for local authors and publishers to sell their books.

On this note, she said that ilandlo started an e-commerce market platform and has been making local products available to the rest of the world.

Apart from promoting and selling the local products, Ozukum said that it also educates customers about Naga culture.
With the tag, ‘Empowering sustainable livelihood,’ Ilandlo deals in products that include food & gourmet, books, music, clothing, and accessories, among other.

Along with co- founder and director Imtisunup Longchar, ilandlo has 20 members from Kohima, Dimapur, Mokokchung and Delhi.

Meanwhile, Ozukum made a plea to the people to be part of the journey of ilandlo and make the local products available all over the world.

Shiroi Lily Shaiza, co-founder of NagaEd has been declared winner of the best women led startup award. She will also receive Rs 1 Lakh during the CSR and Investment conclave in Kohima, which will be handed over by Sitharaman.

NagaEd focuses on the principle that an educated and empowered community help build a better society.

Representatives from North Eastern Development Finance Corporation Limited (NEDFi) and HDFC Bank also spoke at the programme, stating that they look forward to working with the Naga entrepreneurs.

They also assured all possible assistance to take the Startup India initiative forward in Nagaland.